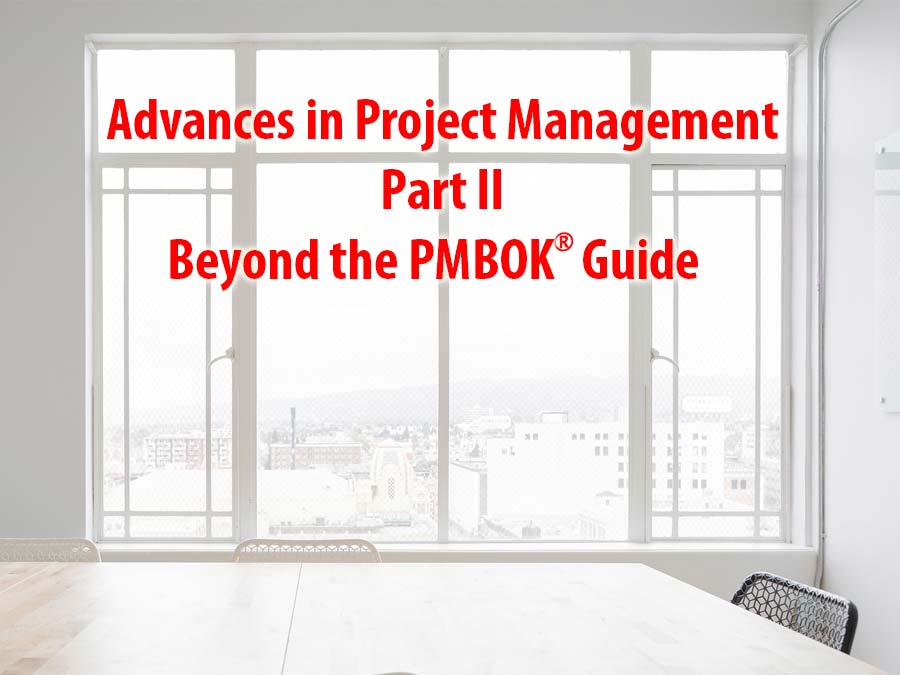 Advances in PM Part II: Beyond the PMBOK® Guide

In Advances in Project Management Part I we looked at how PMs are really investment managers. In this episode we extend the discussion to look at techniques in getting the value achieved.

From risk-based analysis of the WBS to determine the effectiveness in enhancing value of each project activity, to the project leadership needed to unleash the power of the team in delivering products, to accepting and demanding that some of the accountability for project value belongs with others beyond the PM, this episode looks at the next level of getting value out of projects…beyond the PMBOK®.

PMBOK is a registered trademark of the Project Management Institute

Mike brings nearly 25 years’ experience as a Consulting Executive, IT Project Portfolio and Program Manager, Process Engineer, and Software Architect, and still doesn’t know what he wants to do when he grows up. His background in Project Portfolio Management (PPM) started at NASA in the early 1990s supporting large, complex initiatives such as the International Space Station and High-Performance Computing & Communications (HPCC) programs.

Since then he has managed and consulted on $500M+ project portfolios, and trained CIOs and other senior executives in Federal Civilian, Military, and Commercial environments. He is also the author of the recent best-selling book, “The CIO’s Guide to Breakthrough Project Portfolio Performance.”

Born in Tokyo in 1956, he majored chemical engineering at Tokyo University. He stated his carrier in JGC as a process engineer, and later became schedule engineer/project manager/PMO member in the plant engineering and the IT development fields.

Since 2007, he privately started research work on PM theory and established a theoretical framework called ‘risk-based project value (RPV) analysis.’ Using this framework he has published a series of academic papers in domestic and international journals. In 2009, Japan Industrial Management Association awarded his first article as the best research paper of the year. He obtained doctor degree by his study in 2010.

Joseph A. Sopko, PMP, MSP, P3O is an organizational project management improvement consultant, trainer and a joint recipient of the 2013 Shingo Prize Research Award as a contributing author to The Guide to Lean Enablers for Managing Engineering Programs.

With over 25 years of active project and program leadership experience in large and small organizations, Joe has served in a wide range of operational and project leadership roles both during his career in the US Navy and in the commercial sector, including eight years as an organizational improvement consultant at Siemens.

For the past ten years, Joe has had considerable involvement in organizational project and program management infrastructure development and improvement initiatives including global standards development and advisory committees with PMI, APMG and ISO.