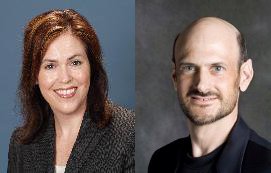 A discussion with Jim York and Elizabeth McQueen on the effectiveness of the agile software development approach at the Customs and Border Protection agency – what it takes to make it work, and what happens when it does!

For more than 25 years, Jim York has led, trained, and coached individuals, teams, and organizations in the implementation of Lean and Agile ideas. He is a Certified Scrum Coach and Certified Scrum Trainer. His coaching and workshops blend his practical experience in Scrum, Lean Software Development, Extreme Programming, Product Management, and traditional project management. Jim shares his passion for teaching as a frequent presenter at conferences, users groups, public and onsite workshops, and as a business process coach. In 2007, he cofounded FoxHedge Ltd (http://foxhedgeltd.com) with his wife, Melissa York. Their mission is to coach leaders to build effective teams and products.

Elizabeth McQueen is the Branch Chief, International Trade Data System, at Customs of Border Protections. She is also PMIWDC’s 2014 Chapter Vice-Chair. Elizabeth was elected as a chapter Director at Large in 2012, but her involvement with PMI and volunteering began several years earlier.

Elizabeth joined PMI and the Washington DC Chapter, and attained her PMP certification, in 2005. She started volunteering the following year with the Business Process Assessment committee, eventually managing the Business Process Definition project in 2008. In 2009, she accepted an appointment to the role of Assistant Vice President for Records Management. During her tenure as the AVP, and then the VP of Records Management, Elizabeth worked with each operational area to help define their processes and create reusable templates, and to clean up each area’s SharePoint site.

Elizabeth served one term as the VP of Records Management before being elected as a Director-at-Large to the Governance Board beginning in January 2012. The Governance Board appointed her as Vice-Chair for 2014, switching her tenure with another DAL to allow her to subsequently serve as Chair in 2015.

From a professional perspective, Elizabeth is currently Director of Program Control for Customs and Border Protection’s Cargo Systems Program Directorate, within the Department of Homeland Security. Prior to her work with DHS, she owned Process Evolution Group (PEG), a business process improvement and project / program management training corporation.

Elizabeth graduated in 1988 from the University of Texas at Austin, with a BS degree in Advertising. She lives in Alexandria, VA with her husband Steve and their tri-color Shetland Sheepdog, Bella. Outside of her professional work and time spent volunteering with the Chapter, she enjoys cooking, yoga, and travel with her family.