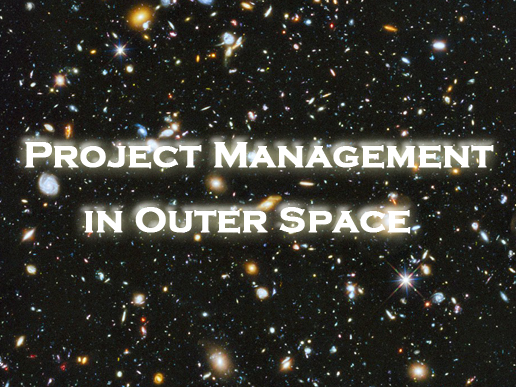 Now hear the professionals on this episode that actually manage, the real activities that puts humankind into this realm, this outer space.

With NASA’s Roy Maizel, Dr. Eric Smith, Sandra Smalley, and Jim Watzin you can hear the costs, size, complexity and hoped for outcomes of these very non-fiction programs are, from a Project Management Point of View.

And get a free PDU!

PM Point of View® is a podcast series produced by Final Milestone Productions, and is a registered trademark of M Powered Strategies, Inc. PMI members and the public at large are invited to listen to  informative conversations with practitioners and executives from all over the world as they discuss various perspectives on project management – its uses, its shortcomings, its changes, and its future.

Prior to becoming the Deputy Program Director in 2010 he was both the Webb and Hubble Program Scientist. In that role he was the senior NASA scientist responsible for the Webb science content and was also responsible for monitoring and managing the science program for both the Webb Telescope and Hubble, ensuring their missions remain viable and true to NASA strategic objectives. As Program Scientist for Webb Smith was responsible for the definition and safeguarding of the “Level 1” science requirements for Webb. These delineate the essential capabilities the observatory must possess such as primary mirror size, instrument complement, and mission lifetime.

He works with the Webb Project during the observatory’s development to keep NASA Headquarters management and external partners, both international and intergovernmental, apprised of how the developing hardware measures up against costs, schedules, and science requirements.

Before coming to NASA Headquarters he worked at the Goddard Space Flight Center on the science team for the Space Shuttle borne Ultraviolet Imaging Telescope, and on the data archiving and distribution system for Hubble. He was also the Webb Deputy Project Scientist from 1996-2001.

Roy A. Maizel is NASA’s Deputy Associate Administrator for Management, responsible for the formulation and execution of the Directorate’s $4+ billion budget, as well as the guidance and oversight of all strategic planning and policy development activities. He is also responsible for the provision of administrative support to the Directorate’s approximately 200-person Headquarters organization.

Mr. Maizel holds a B.A. in Political Science (1979) and an M.S. in Public Policy Analysis (1981) from the University of Rochester. He joined NASA in 1981 as a Presidential Management Intern, and acquired extensive experience as a Program Analyst on both the Space Shuttle and Space Station programs. Since 1988 he has held a series of progressively responsible management positions in the Space Shuttle, Space Station, Earth Science and Space Science programs. When the Space Science and Earth Science programs merged in 2004 to become the Science Mission Directorate, Mr. Maizel became Director of the Business Management Division. In 2005, he became Director of the Management and Policy Division, a position he held until his appointment to his present position in June 2008.

Mr. Maizel is the recipient of numerous awards, including NASA’s Exceptional Service Medal

From 2014 – 2015, Ms. Smalley served as the Deputy Director for the Heliophysics Division in SMD whereby she provided executive leadership, strategic direction, and executive management for a portfolio of 24 projects in formulation, development and operations. Prior to joining SMD, she served from 2008 – 2014 as the NASA Director for Engineering, Program and Project Management, in the Office of the Chief Engineer during which she established, revised and implemented NASA’s acquisition, engineering, and program/project Management policy and requirements for NASA’s Human Space Flight, Robotics, Aeronautics, Information Technology (IT), Institutional and Infrastructure, and Research and Technology portfolios. .

Early in her career, Ms. Smalley served as the Program Manager for the US Navy’s Expert Systems Program and was responsible for implementing the first information technology system in the Hull, Mechanical and Electrical Systems Division at the Naval Sea Support Center Atlantic. Since joining NASA in 1992, Ms. Smalley has served in roles throughout the project life cycle including program manager, project manager, systems engineer, business manager, and science manager on various spaceflight, information technology, and research and technology including: the Integrated Enterprise Management Program, the Stratospheric Aerosol and Gas Experiment III, the Advanced General Aviation Transport Experiment, the Space Technology 5 project, the Pathfinder Instruments for Clouds and Aerosol Spaceborne Observations (PICASSO) proposal development team, and the Gas and Aerosol Monitoring Sensorcraft (GAMS) technology development initiative.

She earned her Master degree in Electrical Engineering from Old Dominion University and a Bachelor of Science in Physics from the College of Charleston.

Mr. Watzin has extensive experience in robotic spaceflight mission development for NASA and the Department of Defense, spanning a career with multiple leadership roles in program management, project management, and systems engineering. He is currently the Director of the Mars Exploration Program at NASA.

Previously, he served as the Deputy Program Executive for C4ISR at the Missile Defense Agency (MDA), having responsibilities for radar, space, and airborne sensor development. In this role he was considered the Agency’s senior executive for space. Before that, Mr. Watzin served NASA at Goddard Space Flight Center (GSFC) in concurrent roles as the Associate Director of Flight Projects for the Explorers Program, the Living with a Star Program, the Solar Terrestrial Probes Program, and the Planetary Science Projects Division. There he was responsible for the development and execution of orbital and landed planetary instruments, spacecraft, and missions managed in support of NASA’s Science Mission Directorate – overseeing a portfolio of multiple projects with a combined budget of ~$1B.

Earlier in his career he led the systems engineering for NASA’s Telerobotic Servicer Project, an effort to develop robotic assistants for astronauts in which he drew heavily from marine research and oil industry experience. Mr. Watzin was appointed to the Senior Executive Service in 1999.

Mr. Watzin also has experience in the evolving nuclear energy sector. In 2009, a private entrepreneur familiar with his aerospace success asked him to lead an initiative to develop a small high temperature gas reactor – a novel approach to providing safe nuclear power for underserved communities.

As a private consultant, he organized a mixed industry team from the United States and South Africa to address this vision and delivered an in-depth technical and business feasibility assessment. He showed the ideas to be viable and they are now under serious consideration for development.

Since October, 2003, Mr. Watzin has served as a member of the External Advisory Committee for the Laboratory for Atmospheric and Space Physics (LASP), University of Colorado, helping to shape the Lab’s strategic plans and guide it successfully through the challenges of rapid expansion and growth.

Mr. Watzin is the author of 26 technical papers originating from his work at GSFC. He is the Recipient of 36 Awards, including both the prestigious NASA Medal for Outstanding Leadership in and the NASA Medal for Exceptional Engineering Achievement. He earned a BS in Mechanical Engineering from the University of South Carolina and a MS in Dynamics and Control from the School of Aeronautics and Astronautics at Purdue University.