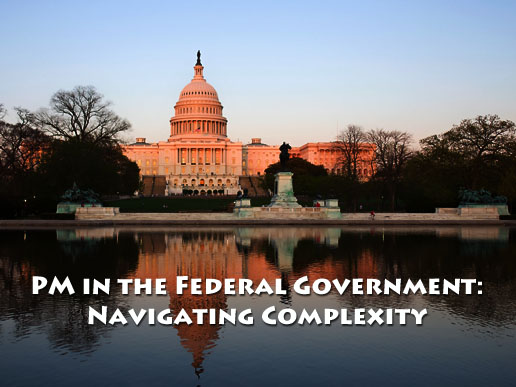 PM, it’s everywhere, and one of the most interesting places to find it is in the US Federal Government. As one of the largest project-generating bodies in the world (just look at the budget!), the Government faces challenges related to size and budget processes…and yet, the culture of Project Management can mature and flourish throughout.

Hear how three distinct organizations use Project Management techniques in various ways to achieve very different outcomes, from a program that is essentially about communication at the National Park Service, to the data collection requirements of the National Oceanic and Atmospheric Administration, to the deep technical research requirements within scientific missions at NASA.

Listen in, learn and get a free PDU!

An internationally recognized atmospheric scientist and a descendant of the first elected chief of the Cherokee Nation will lead NOAA’s Unmanned Aircraft Systems (UAS) program, the agency announced recently. The fledgling UAS program received $3 million in direct support for fiscal year 2008 and is expected to grow as the agency experiments with its use of unmanned aircraft for climate and weather research, ecosystem assessments, improving forecasts, and other applications.

“Unmanned aircraft opens up enormous possibilities for monitoring our planet on missions too long or grueling for humans to fly and in areas where satellite information is absent or lacking detail,” said new UAS director Robbie Hood. “These aircraft could help us gain new understanding of hurricanes and other severe weather, global climate change, risks to endangered species, and many other areas of concern.”

Growing up in Neosho, Mo., and Picayune, Miss., Hood developed an early interest in weather by witnessing the devastating effects of Hurricane Camille in Mississippi in 1969 and the 1974 Neosho tornado. Her childhood fascination turned into a successful research career studying precipitation, thunderstorms, and hurricanes using remote sensing technology aboard satellites and aircraft.

Hood led the Storm Intensity Monitoring Group at NASA Marshall Space Flight Center and participated in field programs in Australia, Brazil, the Marshall Islands, Alaska, Costa Rica, and the coastal United States. She served as mission scientist on four NASA field experiments studying hurricane development and intensity change. She has also served on a number of multi-agency committees and co-chaired the Joint Action Group for Tropical Cyclone Research, sponsored by the Office of the Federal Coordinator for Meteorology.
Hood is a direct descendant of John Ross, the first elected chief of the Cherokee Nation who held the office for nearly 40 years. Ross is famous for leading the Cherokees on the “Trail of Tears”—their forced relocation from the southeastern United States to present-day Oklahoma in 1838–1839. Coincidentally, one route of the Trail of Tears passes near Marshall Space Flight Center in Huntsville, Ala., where Hood worked for over two decades until moving to Boulder for the NOAA position.

Roy A. Maizel is NASA’s Deputy Associate Administrator for Management, responsible for the formulation and execution of the Directorate’s $4+ billion budget, as well as the guidance and oversight of all strategic planning and policy development activities. He is also responsible for the provision of administrative support to the Directorate’s approximately 200-person Headquarters organization.

Mr. Maizel holds a B.A. in Political Science (1979) and an M.S. in Public Policy Analysis (1981) from the University of Rochester. He joined NASA in 1981 as a Presidential Management Intern, and acquired extensive experience as a Program Analyst on both the Space Shuttle and Space Station programs. Since 1988 he has held a series of progressively responsible management positions in the Space Shuttle, Space Station, Earth Science and Space Science programs. When the Space Science and Earth Science programs merged in 2004 to become the Science Mission Directorate, Mr. Maizel became Director of the Business Management Division. In 2005, he became Director of the Management and Policy Division, a position he held until his appointment to his present position in June 2008.

Mr. Maizel is the recipient of numerous awards, including NASA’s Exceptional Service Medal