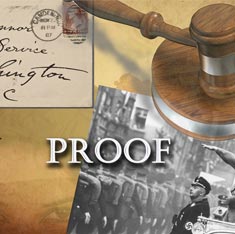 Nazis in Austria, Moral Courage around the world, and the Supreme Court here in the US – all parts of a story on Proof and the project management needed to make it, share it, and bring forward into a context we can use.

In this episode of the Project Management Point of View we hear from guests, Lindsay Zarwell, Leora Kahn and Bert Rein, professionals in three very different fields, discuss how they establish and use “proof” through the use of Project Management techniques.

Lindsay Zarwell received a BA in History from American University in Washington, DC in 1999 and a Master of Library Science from the University of Maryland’s College of Information Studies in 2004. Ms. Zarwell has worked as an archivist in the Steven Spielberg Film and Video Archive at the United States Holocaust Memorial Museum since 2000.

In this capacity she conceived and regularly develops the Archive’s public access database, acquires and catalogs original film materials, and manages several significant digital and film preservation projects. She is an active member of the Association of Moving Image Archivists and presented at annual conferences on the topics If We Stream It, Will They Watch (2012) and Recording Retribution: Issues in the Curation of, and Access to, Actuality Footage of War and Atrocity (2007).

She has recently focused on interpreting and presenting the Museum’s amateur film collections and co-published an essay on home movies titled “Yes, There Was a World: Prewar Jewish Life on Film” in Archäologie des Amateurfilms (2015).

Leora Kahn is founder and president of PROOF: Media for Social Justice. She works on global projects with Amnesty International and the United Nations. Her book, Darfur: 20 years of War and Genocide has won several awards and an exhibition of this work is traveling in the US under the auspices of the Holocaust Museum of Houston.

She has curated an exhibition on child soldiers in collaboration with the UN’s Office on Children and Armed Conflict that continues to travel worldwide with an accompany book “Child Soldiers.”

She lectures and teaches widely on topics in human rights and photography, including Yale, International Center for Photography and the New School in New York. Leora had been a fellow in the Genocide Studies Program at Yale University. She is a Fulbright Senior Specialist and recently taught at University of Haifa. She is working on projects on refugees and testimonies with Clark University and Aristotle University in Greece.

Leora’s recent work has taken her to Rwanda, Cambodia and Bosnia, Sri Lanka and Iraq, where she has researched and interviewed rescuers from these genocides An exhibition comprised of photos and texts of these interviews has traveled to 10 different countries. She has developed a worldwide project on rape and transitional justice with partners, TRIAL and UNFPA.

Leora’s film credits include Rene and I, an award-winning documentary about the life an extraordinary woman who was experimented on by Josef Mengele during the Holocaust. She co-produced Original Intent; a documentary that explores the judicial philosophy promoted by right wing in US. She was director of photography at Workman Publishing and Corbis as well as working at the New York Times Magazine, Time magazine and numerous other publications.

Bert, a founding partner of the Wiley Rein, LLP, is widely recognized as a leading antitrust and commercial litigator and international law expert. He has been recognized by Legal Times as a “Visionary” and Washington’s “Leading Food and Drug Lawyer,” and named by Corporate Counsel as one of the “Best Lawyers in America” for excellence in business and commercial litigation, communications, and antitrust law.